Degassing filter, as self-service filtering equipment, can effectively separate the gas and impurities in the medium, and achieve the effective separation of oil, impurities and gas. It is of great significance for purifying oil and realizing the recycling of oil. At the same time, it plays an important role in the protection and effective utilization of oil resources in China, and plays an increasingly important role in alleviating the shortage of oil resources and improving the effective utilization rate of machinery resources. 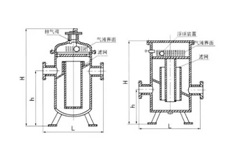 NEXT : How to improve the filtering effect of stainless steel liquid filter?